Haven't updated in a while!
I've been silently working on the game; adding in ledge grabbing and climbing, making and then remaking the first boss along with some quality of life improvements.
I got a new laptop recently and can finally run Vulkan without crashing my computer (for some weird reason) so I decided to make a Vulkan build to try it and the game runs 150-300% faster.
I've updated all the download links in the Dev Log and itch.io page so you can download them, and I've included a set of debug options to enable and disable most of the abilities.
The "README - DEBUG.txt" file included with all the new zipped demos contains the controls as usual as well as the debug commands so you can play around with them.
Have fun and hopefully I can make new progress on the game soon, but currently I'm very busy with work thus it'll be slow so I wanted to make at least a small update.
Enjoy!
Itch.io: https://nitl-dev.itch.io/nitl
DevLog: https://nitl101.blogspot.com/p/demo.html
Posted by Luka Arambašić at 05:33 No comments:

Short update between devlogs
(working on Ledge Grabbing mechanics for the player).

I created a page for NiTL on itch.io a couple days ago in hopes of better publicity and to get on more platforms because it's always a good thing to do.

The page on itch.io currently has the latest demo, which is version 2.6.3. This version is Demo 2 with some updates added to it that are intended to Demo 3.

The demo is still free, but if you want you can send a donation via itch.io before you donate. Every bit helps!

Here's the full link: https://nitl-dev.itch.io/nitl
Posted by Luka Arambašić at 17:21 No comments:

I've finished implementing the new Status Screen, it will update as you discover and acquire new and amazing abilities for the suit, these abilities will be shown in the categorized tabs inside the Status Screen along with your health and ammo. Currently they are not able to be interacted with.


The transition from the Map Screen to the Status Screen and vice verse is a simple dip to black fade transition, this was just to get it working. I'll be doing a better one later when I have more important things finished and out of the way since this works fairly well.

The Status Screen is accessed by either clicking the [STATUS R] button on the top right side of the screen, or if you have a controller by pressing the Right Shoulder Button. You can return to the Map Screen by repeating the action. On the top left side of the screen there's another button labeled [L RESIGN], this is used to quit the game. Make sure you saved at a Save Station otherwise you will lose any unsaved progress.

I'm looking to finish Demo 3 by the end of the year with all bells and whistles on it. So stay tuned for the occasional update.

NiTL is getting better and better every month, thanks for your continued support and I hope to present you with some more progress updates soon!
Posted by Luka Arambašić at 15:21 No comments:

New spritework for all the different beams have been made and added to the game, check them out in action in the .gifs below!

This update was first publish on Patreon, support us on there to help development!
Posted by Luka Arambašić at 16:42 No comments:

Happy New Year to everyone around the world,

Previously there were some big updates to the backend of NiTL which included complete overhauls to the player wall-jumping, collision, and slope detection, followed by new Crawler AI and last week two new enemies but going forward makes that seem small!
This year is going to be big for NiTL as development of the biggest demo yet rolls in, along with it's first boss enemy!

Read on for all the details, starting with a basic comparison photo:

In this photo, everything in the colour black is empty space, the white lines are just borders of the grid the maps are on, and the different colours are different areas within the map.
Now here's where I get into the numbers and stats on the maps of the demos, hold on to your butts:
First Public Demo (Infogamer Tech Demo):
The first finished demo ever released for NiTL;
showcased at the Infogamer Reboot game expo.
Second Public Demo (v2.5):
That's the currently newest available demo.
Third Public Demo (v3, in-development):
Demo currently in production.
Demo Map sizes in terms of tiles:
The number of tiles is calculated by multiplying the room size with the amount of rooms in the map, the number of tiles is equal to the size of the map in 16x16 pixel tile spaces (room width x room height x amount of rooms in demo).
The current demo is 374% larger than the first demo while the one in development is 231% larger than the second demo and if you compare it to the first demo then it's 862% larger.
Enemies currently in the game:
All unique, that's 9 different types of enemies, then we have the player mechanics:

Player Mechanics:
Aside from that I'm going to add in one more enemy type, and a boss, as well as put in Ledge Grabbing/Climbing as another player mechanic.
Then on the system side, there's fully functional saving and loading via Save Stations, Mini-map, a full map screen, a pause screen, room-to-room transitions complete with fade out and fade in.
After I make the demo I'm finally gonna make a proper trailer
There's currently no set release date, but the end of May is the latest for the first version of the demo in terms of deadlines.

I'm going to be using some free assets I found on itch.io by Luis Zuno for the new demo until I can afford to commission original assets for NiTL, but in any case it's going to bring in a breath of fresh air in terms of demo areas and landscape, you're not going to be seeing the same assets over and over again for the entire demo. Eventually I'm going to be swapping out the art used in the demo.
____________________________________
This is also going to be the last demo, meaning that after it's done there are not going to be any more new demos with new maps but only minor updates instead, like replacing art, putting in new audio, finishing menus, etc.
With 143 rooms and a area boss in this demo, that's one sixth of the size of the final game.
Bonus points for reaching the end of the article, screenshots:
Posted by Luka Arambašić at 12:02 No comments:

Extremely proud to announce that the wall, ground, and slope detection has been heavily overhauled.
Due to the way the newest available public demo is built, nobody is going to notice any difference, not that there were many slopes in that demo to begin with.
But what this does mean however, is that development is going to be much much quicker, and it'll speed up level creation by roughly 2000% percent due to the fact that I no longer have to manually specific what a slope and what a wall is for the collision detect to differentiate, along with placing edge colliders on individual tiles since the new system lets me make use of Unity's new Tilemap and Tilemap Collider components.
Overall I'm very pleased and excited to have finally done this, it's been on my backburner for at least a year now and after finishing it I've already made 4 different backups.
More news coming somewhat soon!

Posted by Luka Arambašić at 17:24 No comments:

Long time since the last update, so here's what's new:
Switch gates are gates that open only if the switch is pressed somehow. This means that until you find weapons that go through walls, they're a one-way opening gate.

Wave Beam, the wave beam adds lets the suits beam do extra damage to enemies as well as pierce the environment, letting you open switch gates or shoot enemies that are hidden behind walls.

Plasma Beam, the plasma beam is similar to the wave beam except it only pierces enemies! The plasma beam does extreme damage to any enemy, dealing full beam damage for each frame it's passing through them. When used with the wave beam, it will go through virtually all objects!

Charge Beam, feel like your beam weaponry is still too weak? Charge it up! Besides adding to the base damage, you can now charge up your beam for a huge damage boost! When used with the plasma beam it's guaranteed to eliminated all but the strongest foes.

Well, now that there's an ample amount of enemies, player upgrades and miscellaneous features, I'll be working on a boss creature!

When the boss is finished, I'll be designing a completely new demo with it's own unique map which is going to be 145 rooms large, one room is equal to an entire screen's worth of space, and for reference, the size of current demo is 62 rooms . When that's done, I'll be release NiTL's third and last free demo.

Here's a list of features the demo will contain:

That's all for now! Stay tuned for more updates. 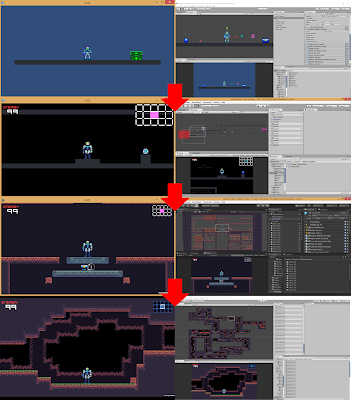 Posted by Luka Arambašić at 01:18 No comments: